Who was... Guy Barber

Guy Barber was born on the 5th of November 1931. He was a carpenter and joiner, who took up the hobby of cycling late in life at the age of 58 (1989) and practised it until he could cycle 50 miles well under 3 hours before he dared joined a group. He amassed a cycle collection of eight, varying from a Butchers Bike to The Penny Farthing. 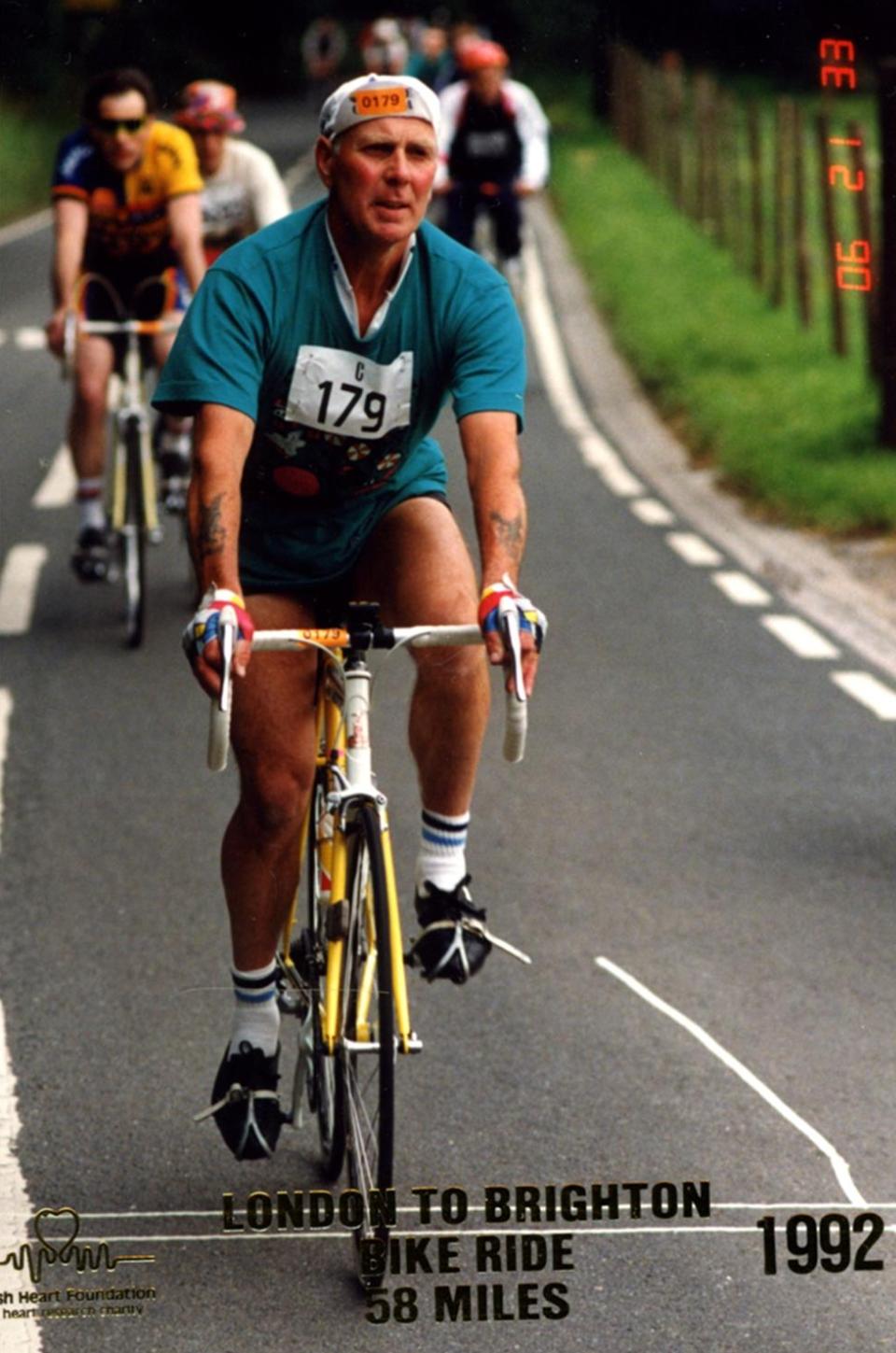 On his racing bike he rode across England, during a Coast 2 Coast and back to his start point.

On one occasion he rode to Cambridge, on his return to Northampton he felt so good he decided to ride to Oxford, returning the same day, having done 200 miles or more. 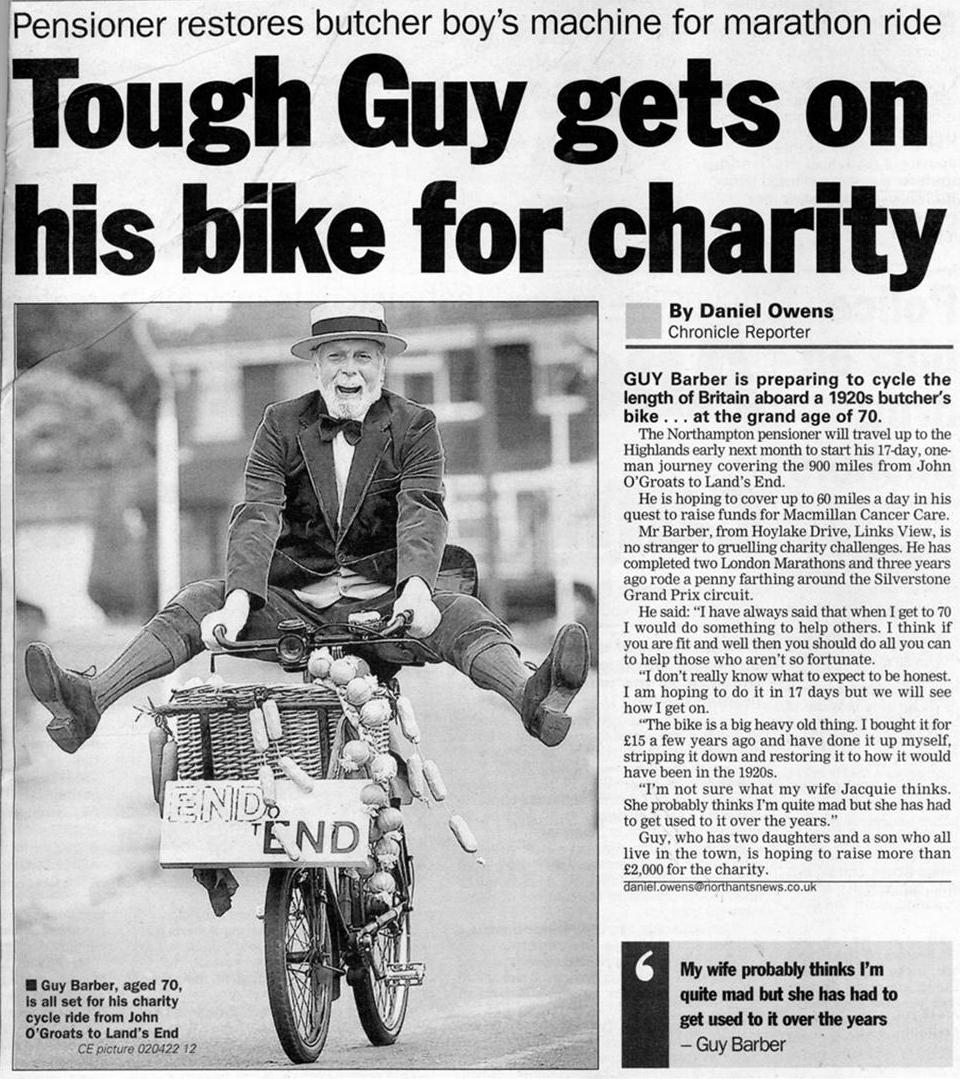 Guy Barber preparing to cycle the length of Britain aboard a 1920's butcher's bike... at the grand age of 70.

The Northampton pensioner will travel up to the highlands early next month to start his 17 day, one man journey covering the 900 miles from John O'Groats to Lands End.

He is hoping to cover 60 miles a day in his quest to raise funds for the Macmillan Cancer Care.

Mr Barber, from Hoylake Drive, Links View, is no stranger to gruelling charity challenges. He has completed two London Marathons and three years ago rode a Penny Farthing around the Silverstone Grand Prix circuit. 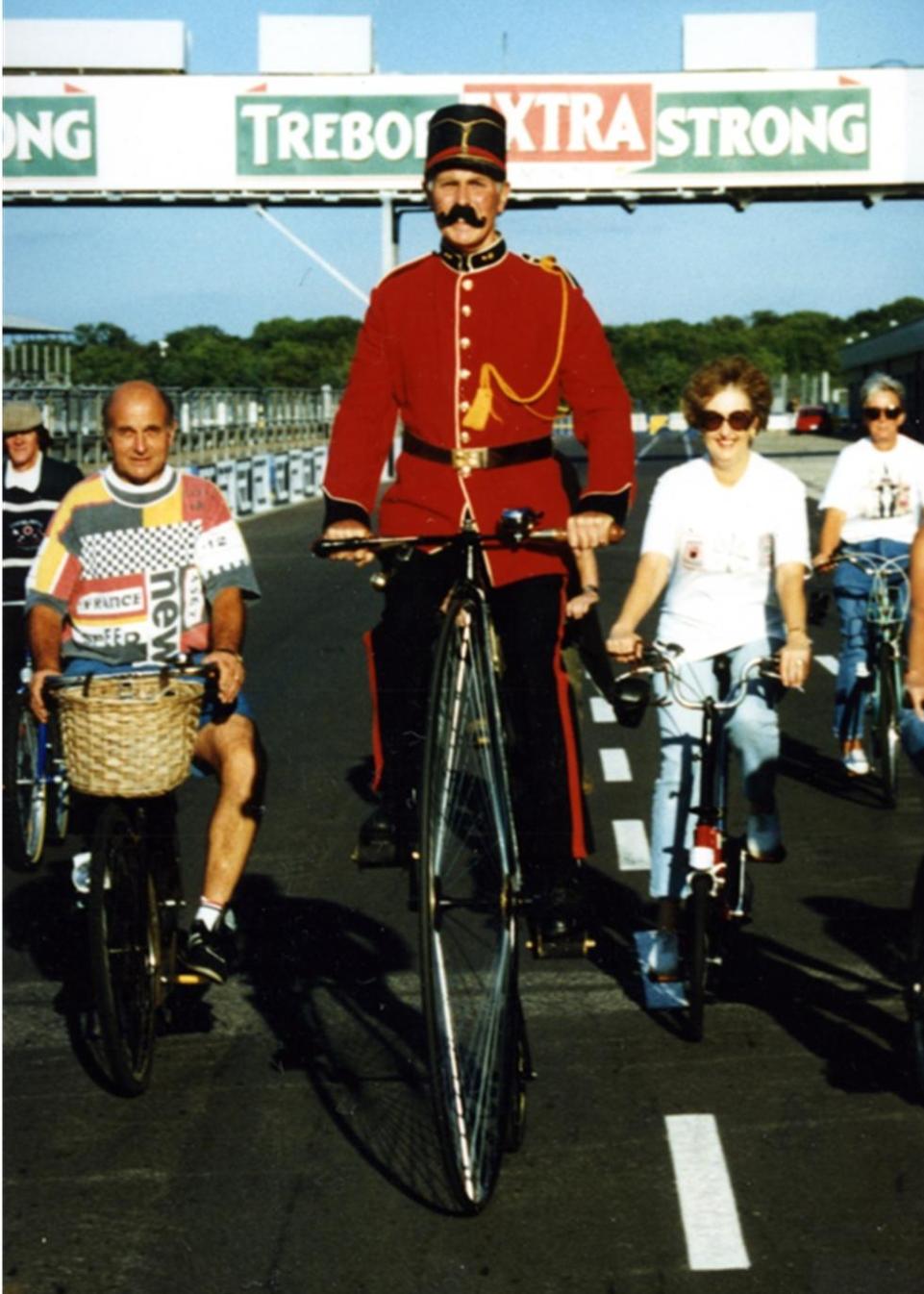 Guy about to ride around the Silverstone Grand Prix Circuit on his Penny farthing in 1999.

He said: "I have always said that when I get to 70 I would do something to help others. I think if you are fit and well then you should do all you can to help those who are aren't so fortunate. I don't really know what to expect to be honest. I am hoping to do it in 17 days but we will see how I get on. The bike is a big heavy old thing. I bought it for £15 a few years ago and have done it up myself, stripping it down and restoring it to how it would have been in the 1920s. I'm not sure what my wife Jaquie thinks. She probably thinks I'm quite mad but she has had to get used to it over the years."

Guy, who has two daughters and a son who all live in the town, is hoping to raise more than £2000 for the charity. 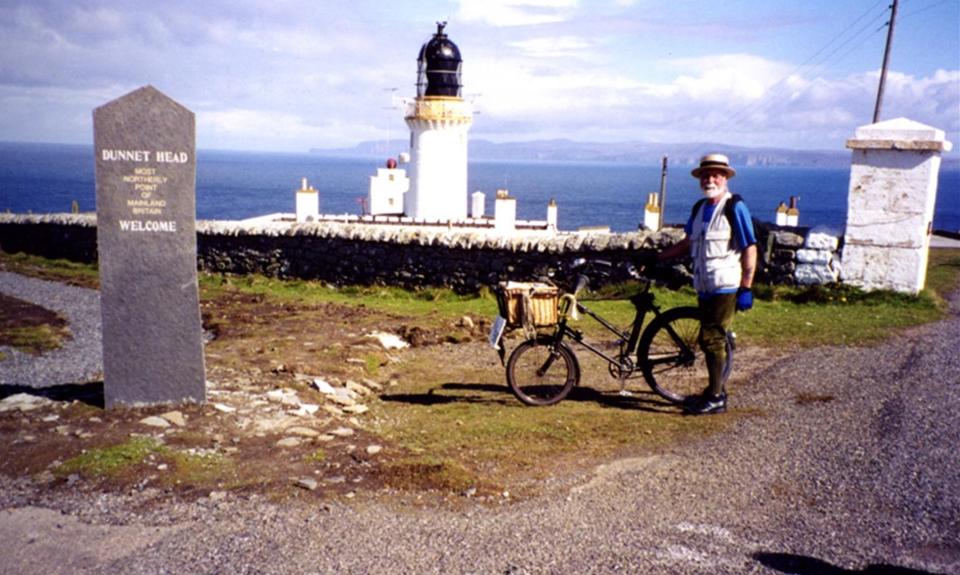 Guy through his life had involved himself in lots of charity funding... On this occasion, it was his intention to ride solely for himself... However, en route people kept wanting to give him money... So, a sign was made and placed onto his basket at the front of his bike and money was collected... He passed the money to the Heart foundation...

Guy was a very meticulous person... So in his preparation and without the aid of computers and things, Guy sat down with maps and worked out his routes for his epic... He also as best maps allow, worked out his prospective mileage in advance... His figure reached by this method, was in actual fact just two miles short of the figure he actually rode ...amazing. 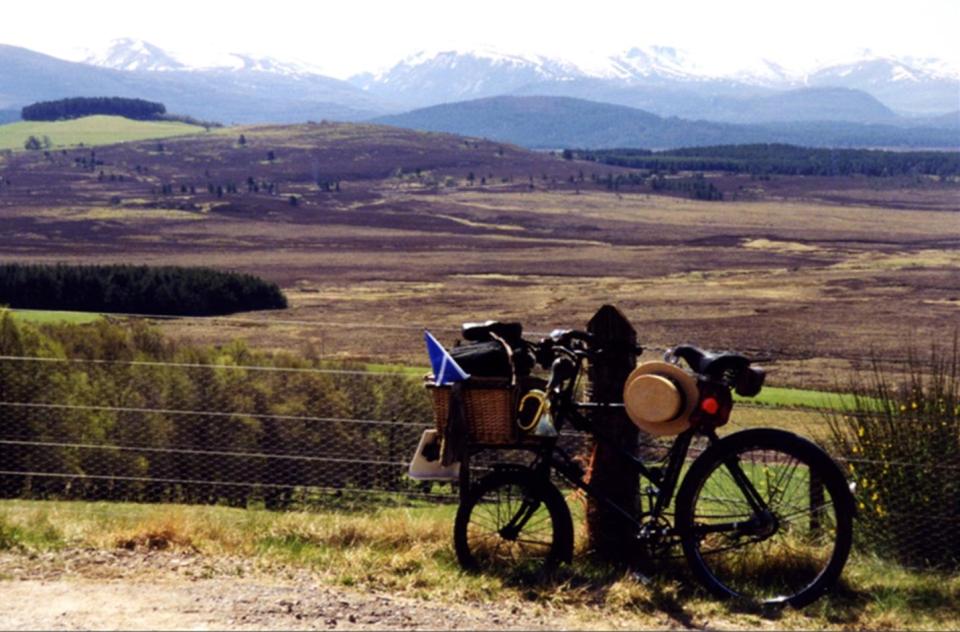 One experience he never forgot though... while he was doing the ride... It was late in the day and he needed somewhere to put his head down... He stopped by, what he thought was an empty looking building/house and thought I can sleep outside huddled up to the wall of the house... It transpired the householder returned and inquired of Guy what he was doing there...Guy told him he thought the house was an empty one and that he was doing the end to end... The householder said you can't sleep there... but promptly said he could use one of the spare beds that he had and that breakfast would be provided for him in the morning... 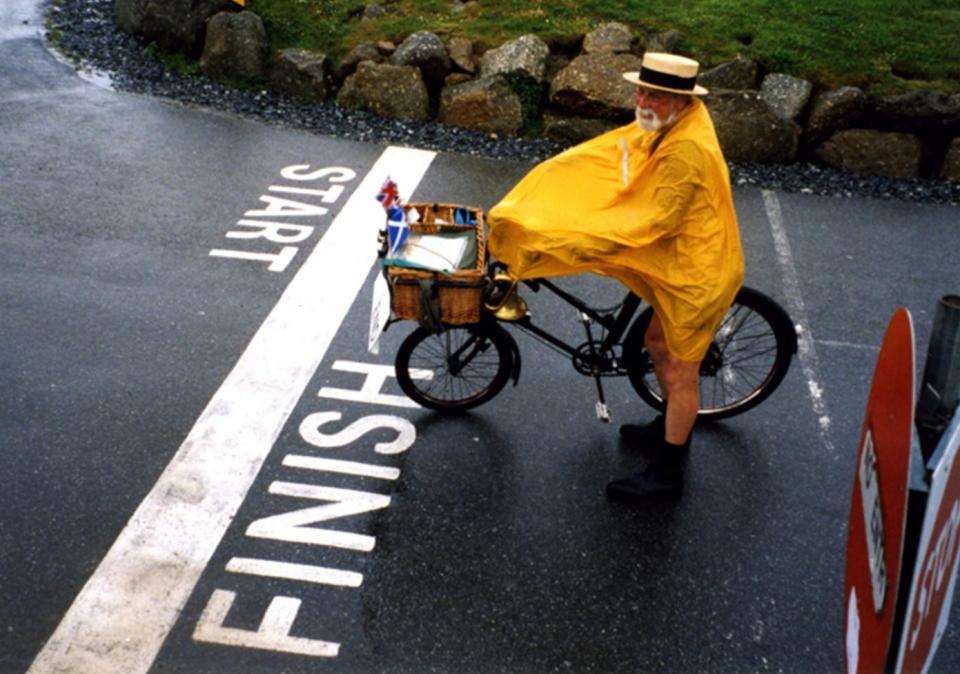 Incidentally, when finally he left Cornwall for London on the train, he arrived at Paddington station and then rode across London in the rain, to London Euston station before boarding the Northampton train, arriving in Northampton where he rode home in the rain... 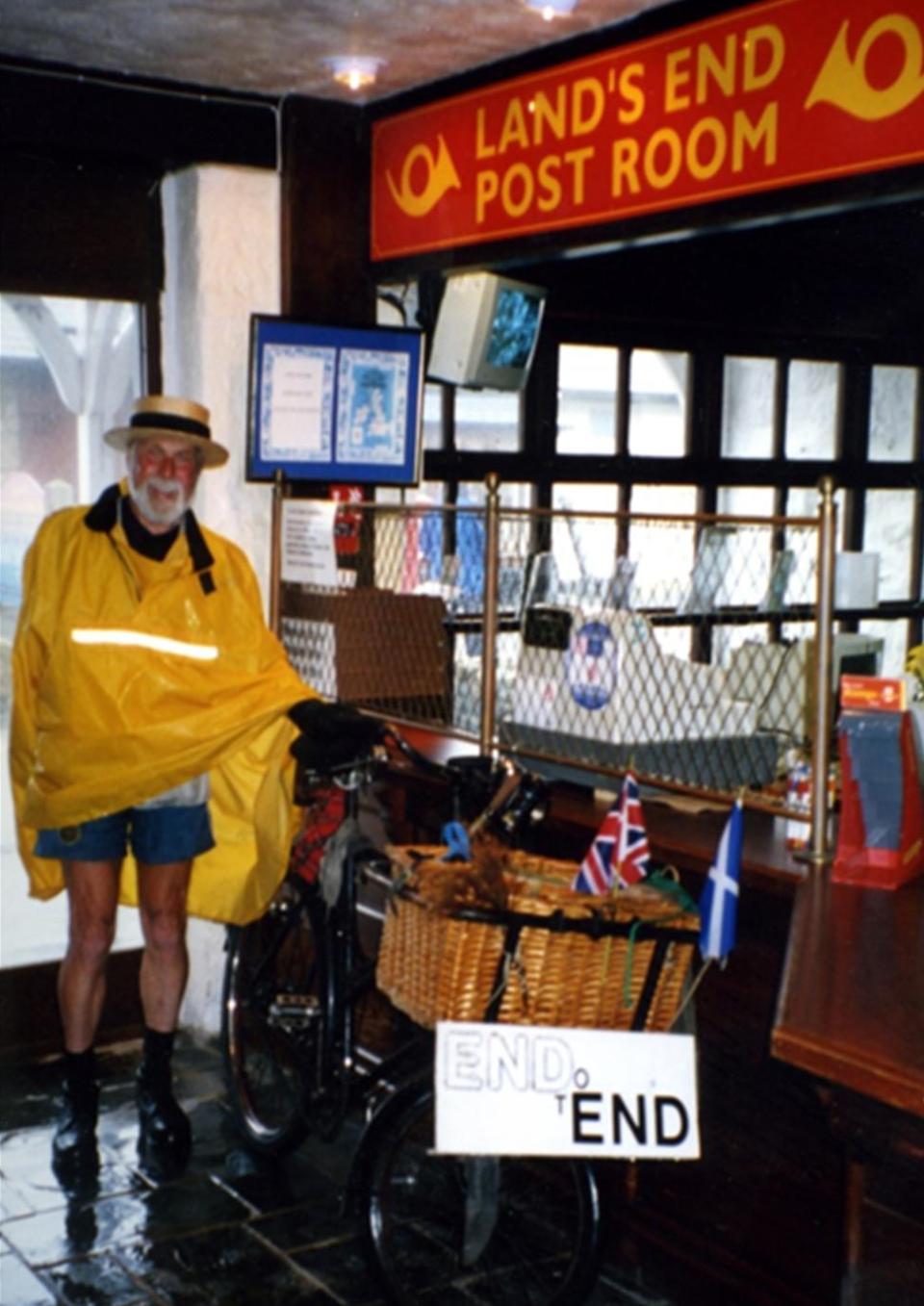 Charity ‐ Guy Barber established a team from St. Andrews hospital who each year would be taken to London their bikes aboard one of St. Andrews trucks, and they would ride the London-Brighton heart foundation money raiser. 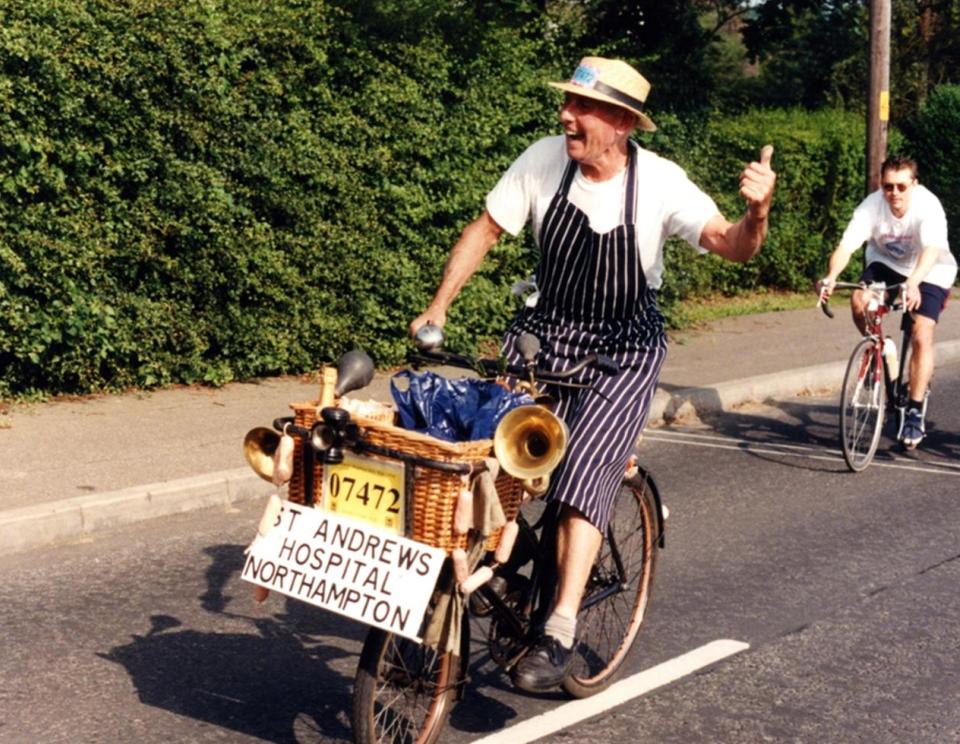 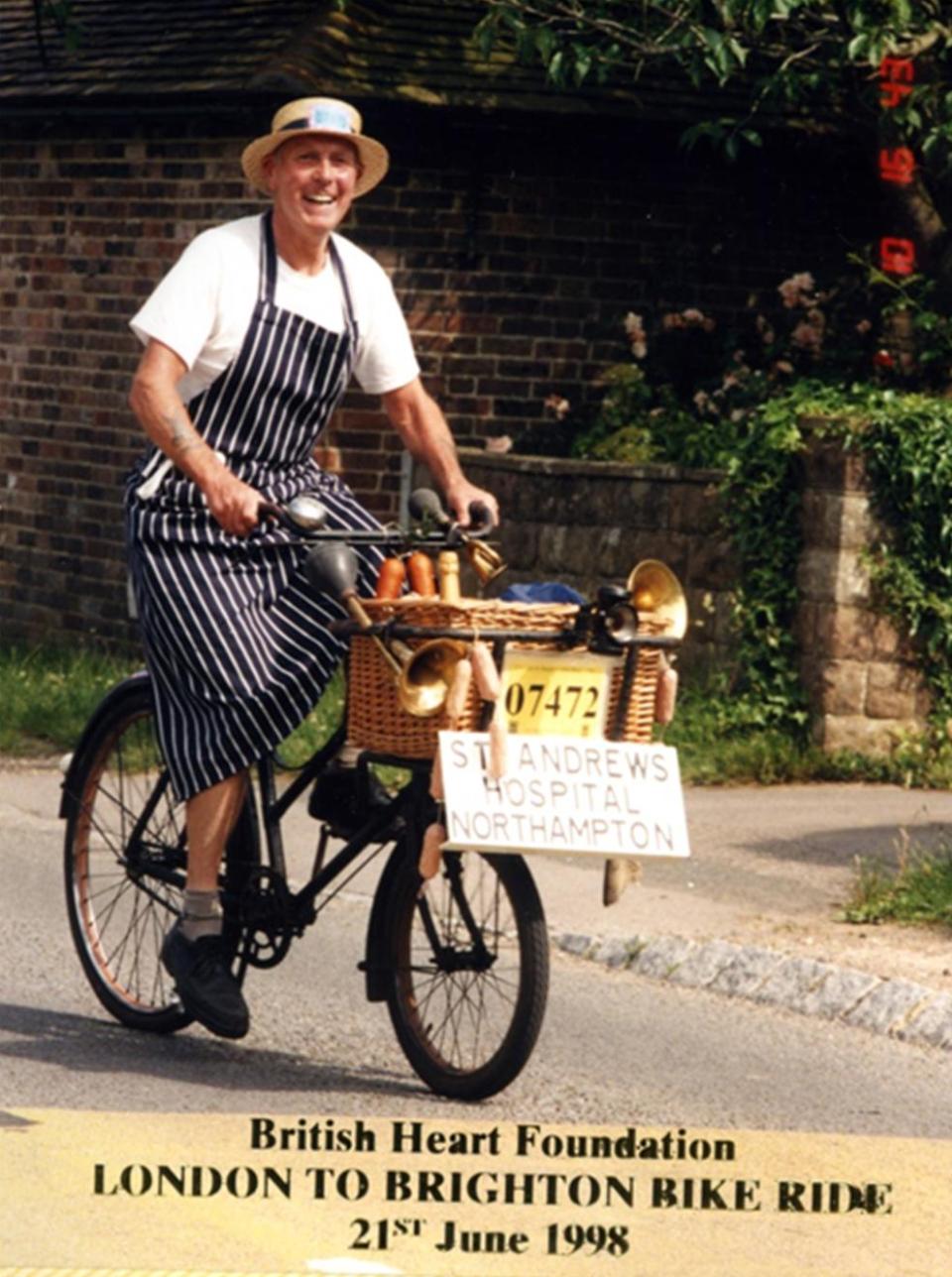 Penny Farthing... he rode his Penny Farthing into Northampton Town, around Abington Park and the Racecourse, weather permitting, summertime, into the countryside about a 60 mile tour in a day. 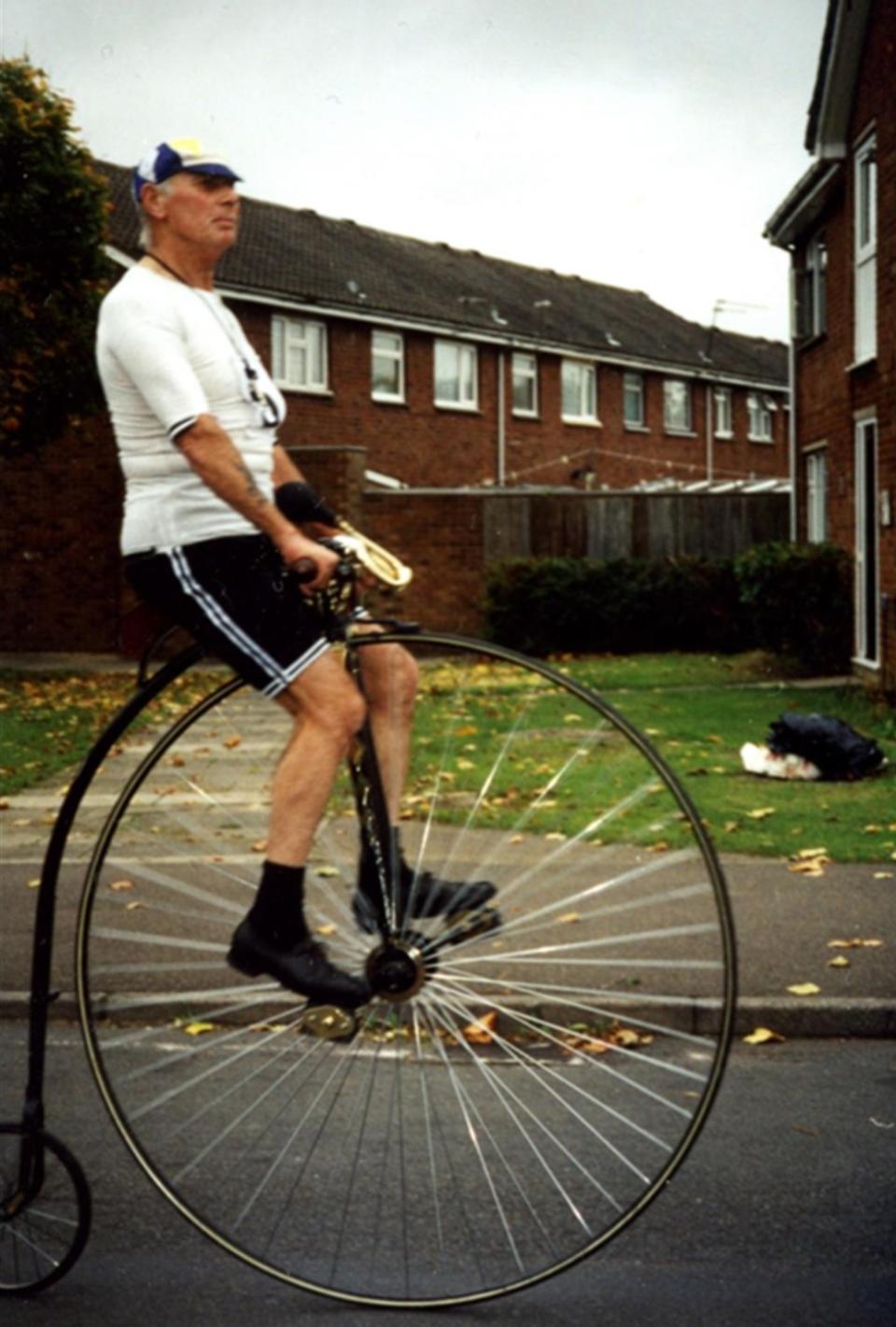 He also liked to cycle it on occasions dressed up in various costumes such as a Skeleton in the Northampton Carnival Parade. 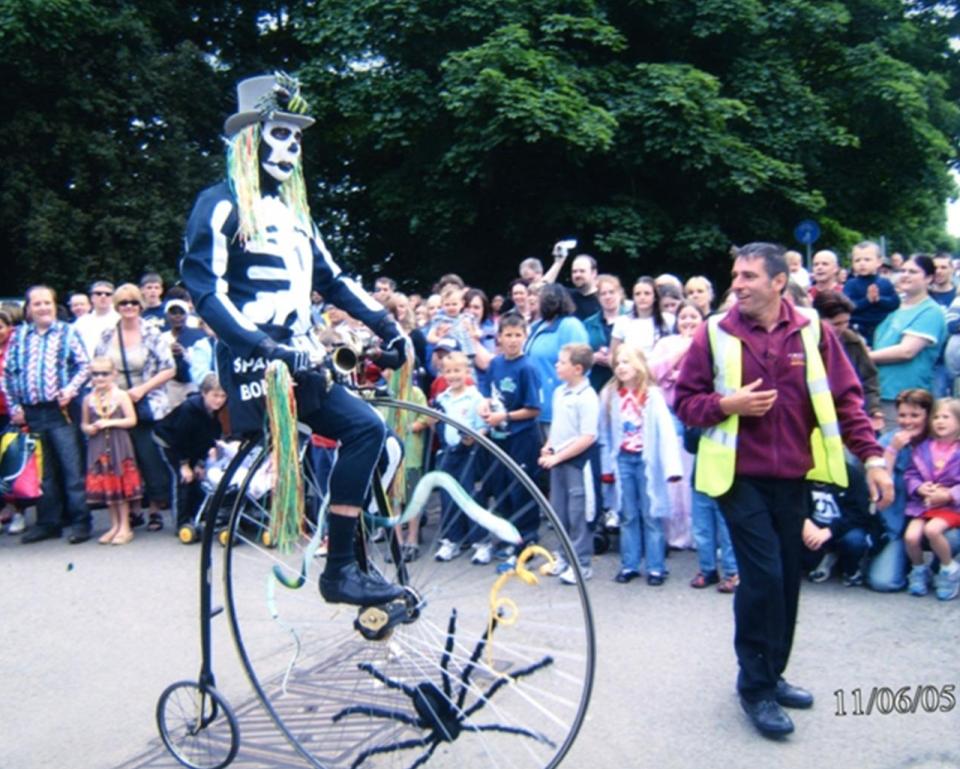 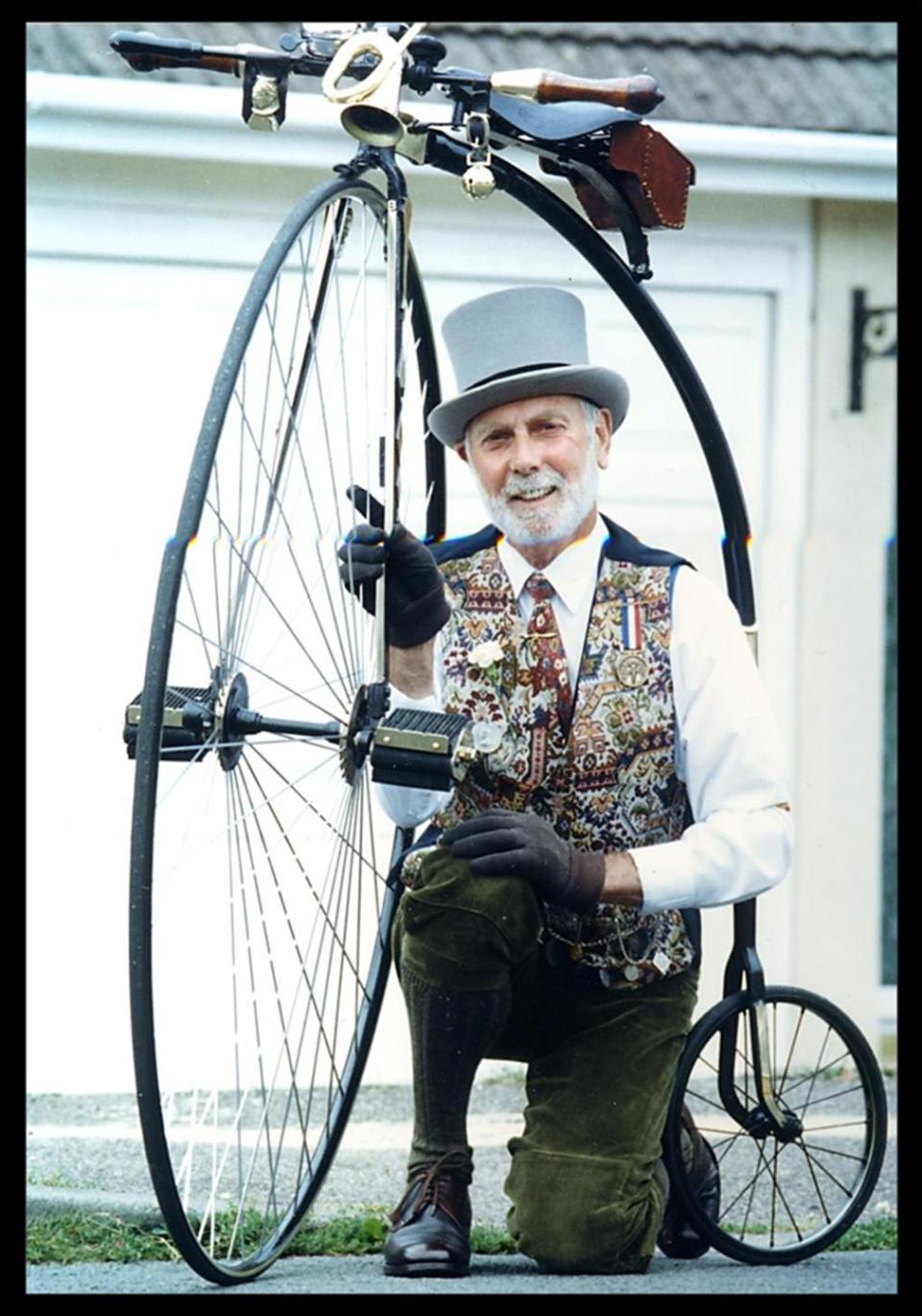 In August 2006 Bill Simpson started the GUY BARBER ‐ MEMORIAL ‐ CHARITY RIDE in memory of his friend. The annual CTC Northampton charity ride benefits 'Headway' while the route goes to St Neots or Cambridge (110miles), a city which he loved to visit for its architecture, history and culture. In 2017 an alternative route was tried to Oxford (93miles), another favourite city of Guys.

Cycling UK is a trading name of Cyclists' Touring Club (CTC) a company limited by guarantee, registered in England no: 25185. Registered as a charity in England and Wales charity no: 1147607 and in Scotland charity no: sco42541. Registered office: Parklands, Railton Road, Guildford, Surrey GU2 9JX.